Drove down to Savannah yesterday for the holiday weekend, because really what’s better than spending Halloween in one of the most haunted cities in America. Allegedly I’m staying in a haunted hotel, can’t say the dogs or I have seen jack though. Shouldn’t be a surprise this city is so haunted, not only is it of course extremely old, but let’s be honest, this city was built originally on human misery. But I have to say just like Charleston just north of here, there’s a new energy here, lots of new stores and dining and a real infusion of artistic energy with people moving in from all over the country, really the world.

Tried out The Grey, one of the hottest new restaurants in the country, Esquire says so anyway. It’s in an old Greyhound station and the executive chef is a NY girl, Bronx born and raised come down to Georgia. Beautiful space, excellent cocktail program. I had the oyster pot pie to start, amazing, was slightly mixed on the BBQ rabbit special (maybe I just don’t like rabbit) desserts were fuckin awesome, definitely worth going to, just do yourself a favor and make a reservation or go really early.

If you guys go to Savannah, stop by Southbound Brewery for a tasting, they’re just outside of downtown, really great space and staff and some really innovative beers, they had a blood orange shandy that was amazing, and I usually hate shandy’s and a double IPA with nectar added to take the edge off the hops. These guys are quickly rising to the top of my favorite Georgia breweries. 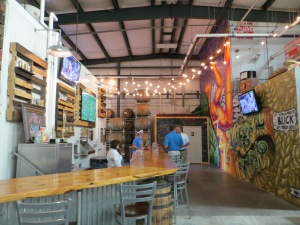